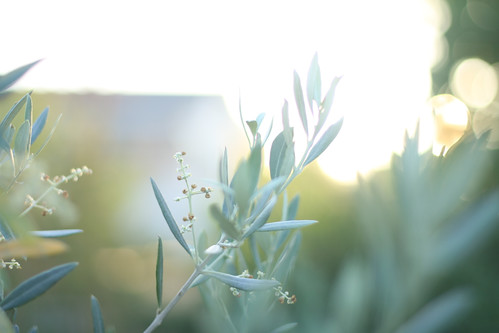 I guess what it comes down to is a lack of habit. That’s why I go through periods of blog breaks. I can make excuses here and there but really it’s a lack of daily writing & photographing habit that keeps my sharing it with you a spotty one. There are so many habits folks talk about that I wish I could pick up on, do you feel that too? If only you spent 15 minutes a day exercising, you’d be in shape in no time. 15 minutes of tidying your house everyday will keep it in good shape for company. 15 minutes of daily mediating will change your life. 15 minutes of writing and you’ll have a novel in no time flat. Declutter for 15 minutes a day and you’ll live in an orderly household. 15 minutes to practice guitar each day and you’ll be strumming your favorite songs in no time. If I were disciplined and had no outside factors weighing in on my time and attention, I could schedule my day into neat and tidy 15 minutes segments and probably accomplish a lot more than I currently do. 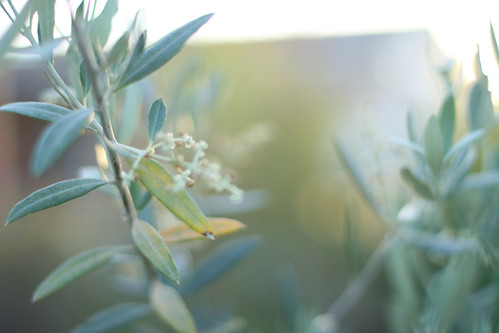 As it is, those outside factors weigh heavily on my days and I hungrily have to steal away whatever moment I get to photograph and write. Please bare with me. 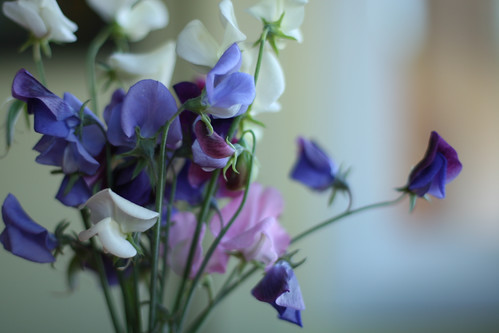 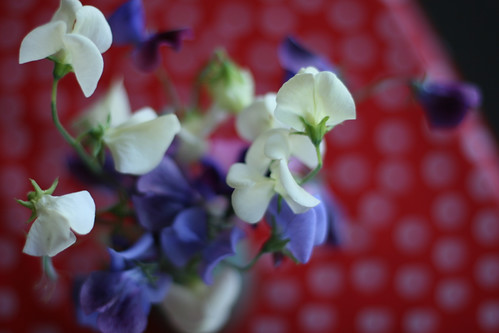 Flowers are blooming. Many of these I have grown from seed, which is an accomplishment I’m quite proud of. We grow vegetables from seed all the time, but for some reason I always bought my flowers as plants from the nursery. The sweet peas were a rough growing road, as I dutifully followed Floret’s advise and planted seeds in January in custom made potting mix, placed them on the sunny patch on my washing machine and then heard them fall, as the vibrations of the running machine tossed the entire tray onto the garage floor. Oh my! In a crying mess, I heaped it all back together and placed them outside and forgot about them, but the relentless seeds grew anyway and I transplanted them, not knowing which variety was which. I’m just so glad to have any at all. 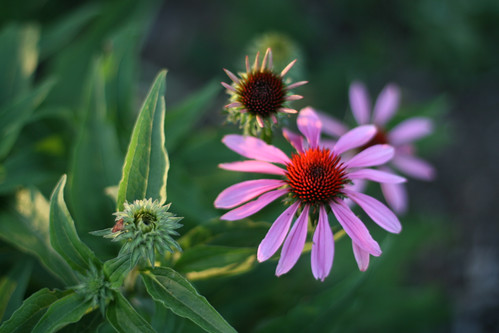 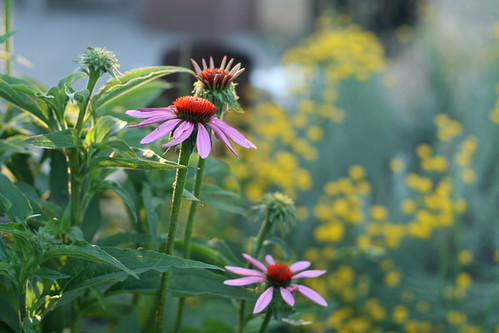 The echinacea I’m so very glad to see blooming as this was another seed I started over a year ago. I must grow more. 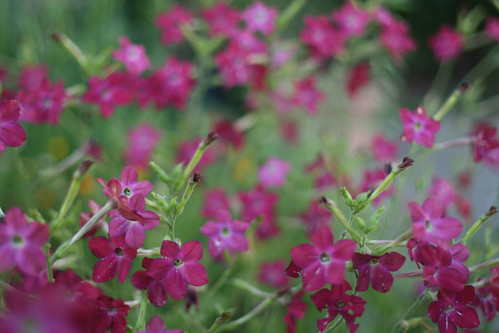 This nicotina? Though I didn’t plant the seed myself, it reseeds readily and I don’t do a thing to stop it. So beautiful. The great big bumblebees love it. 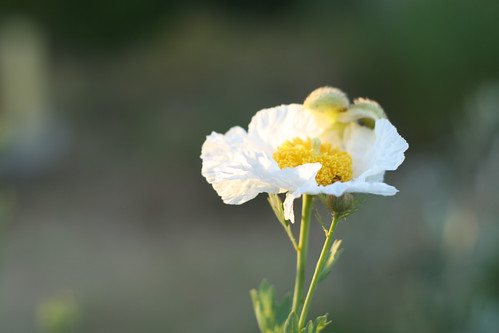 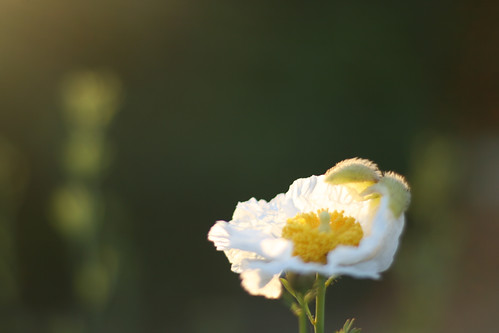 These majolica poppies were here when we moved in three years ago and were blooming a bit. The next year they did nothing. Last year I gave them a tough love talk and told them that was their last year, if they didn’t bloom I was going to rip them out. They didn’t bloom. I ripped them out. Little did I know they have a remarkable root system and came right back over winter and are blooming once more. So very beautiful!

I have another flower blooming that I grew from seed for a very special purpose. I’ll show you next time.

Orderliness in the Garden 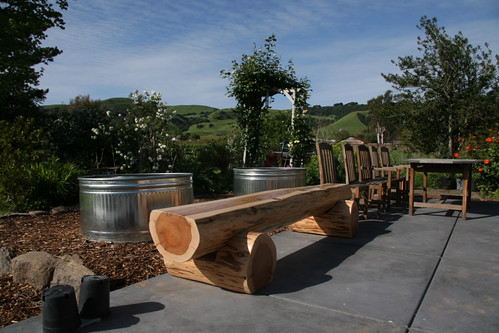 It must be as I’m getting older, but the busier my head gets, the more I crave neatness and order. There is a solid half of me that thrives in wildness, that even feels inspired by it, and yet there is a solid and loud half of me that goes a little batty when I see chaos. This is displayed in consistent mass purges (took 8+ bags to the thrift store the other day and already filled up three more) and and a real affection for putting my Felco pruners to good use in the garden. 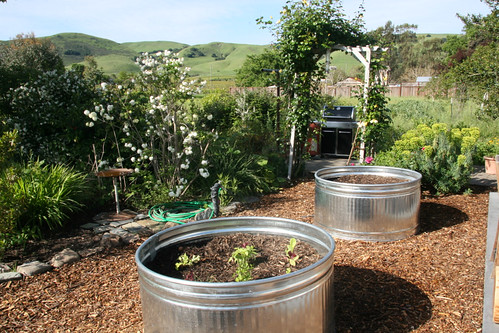 When we first moved in we knew we needed a new deck, but we put a band-aid fix on it. We replaced just a couple of key boards that would help hold up the rest of the dry rotted boards about 3 years we figured. Our 3 year mark of living here is coming up this month (yikes!) and we knew we had to replace our deck. As house projects go ‘simply replacing the deck’ started a domino effect that became a very involved and intricate project involving moving doors, replacing siding, taking out bushes and pouring a new cement patio.

This project, we realized, is really the first project that we’ve created sort of from scratch. Though we’re using the same footprint of what was here, we had a lot of creative play with what materials and colors and slight design details we chose. And oh, what a laborious project freedom of choice can entail. We bickered and laughed and grew closer and almost strangled each other until we came up with our final game plan.

And this, what you see before you, is one half of it. Neat, straight, tidy. We cleared the shrubs, straightened out curved lines and laid landscape cloth, all drawn up on graph paper with mechanical pencils. We even hired two different contractors. This method of building something is all new to us; hob nob, rag tag, cobbled together DIYers. We feel very grown up. 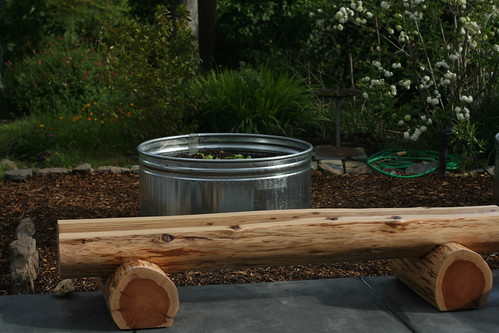 As you can see we added two raised beds. We’ve missed them. We used to garden in them exclusively, but now we grow our veggies straight in the ground which comes with a fair amount of challenges we’ve never faced before. In effort to make gardening ‘simple’ again, we put in these two beds close to our back door to house things we’d like to grab quickly like lettuce, basil & parsley to name a few. As you can see we used stock tanks which conveniently come with a drainage hole at the bottom that irrigation fits right into. We also drilled a few holes in the bottom for drainage and filled it with compost, potting mix and good ol’ Sonoma dirt. 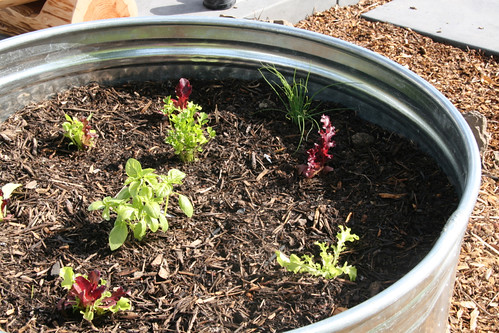 If I were to turn right around and show you what was behind us you might screech at the sight, it’s a total deck debacle. But in just a few weeks time, it’s going to look fantastic. And all of this immediate order, this direct view out my window, will hopefully bring calmness of mind to my scatterbrained self, so that I may venture peacefully further out into the inspiring wildness.

Filed under State of the Garden 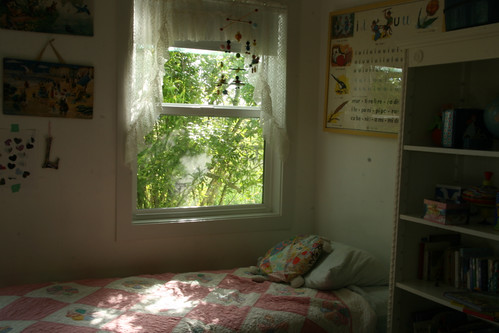 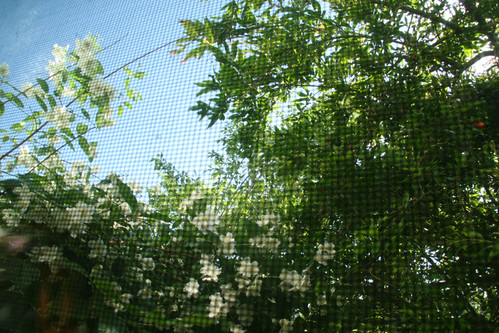 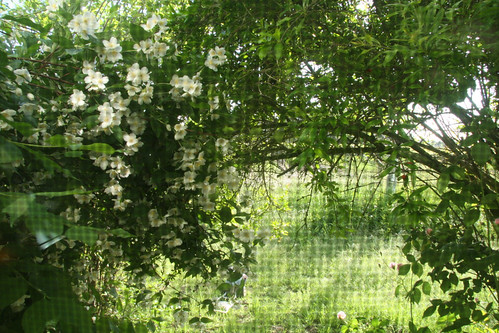 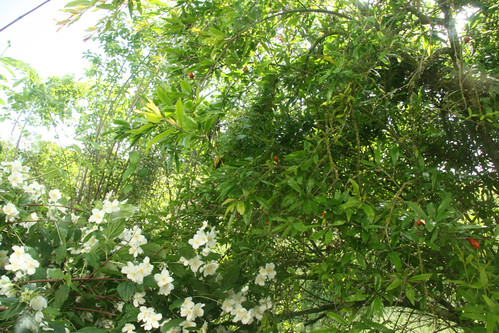 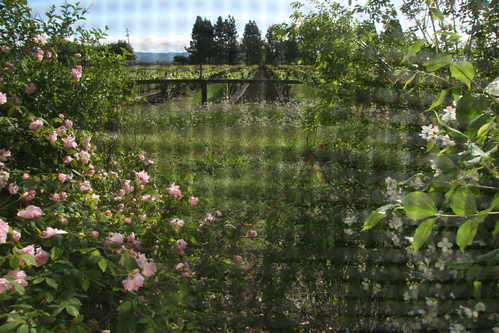 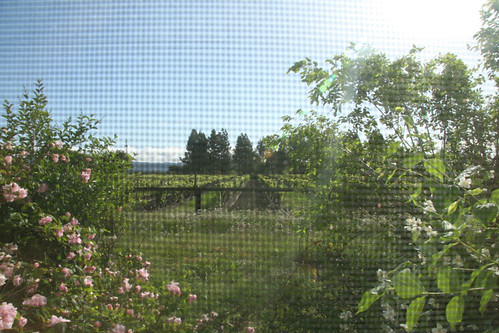 We don’t maintain this side of the yard very well. There is so much of our yard in plain view that needs to be pruned and weeded and well watered. This side of our yard often gets forgotten, yet look, it’s thriving. How does that work? Without a drop of water in the summer, without much human touch, it’s growing into a wild and verdant, flower filled country jungle. I like it this way. We’ve been re-doing the area directly in back of our house into a straight-lined, open, orderly spot. In doing so I worried that somehow that would domino effect the entire yard into an orderly, squared off sort of garden. Part of me likes that order, but we moved here for the wild-ness of it all. So our new personal landscape philosophy is Order Turning Towards Wild. Areas right in front and in back will tend towards the orderly, but the further you venture, we’ll let things turn wild and untamed. At least that’s what we’re aiming for.

This is the side of the house that the children’s windows look out upon and I find it fitting that they look out onto the wild side. The bees live on this side. There is a pathway that was once maintained and that only they fit through now.

Next time I write, I’ll show you the order. For now, I leave you with the wild.

Filed under State of the Garden